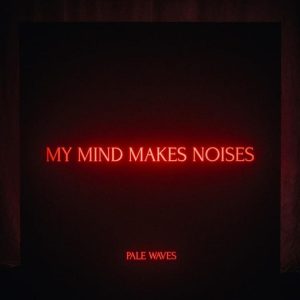 Every single year, a relatively unknown band hits the music scene and proceeds to take the scene and the radio by storm. Meet Pale Waves, a relatively new Indie Pop band from Manchester consisting of vocalist/guitarist Heather Baron-Gracie, drummer Ciara Doran, bassist Charlie Wood, and lead guitarist Hugo Silvani. In the last twelve months, the band has played sold out arena’s worldwide in support of the 1975, done numerous headlining tours, and racked up millions of streams online without even releasing a full length album (or more than two songs at the time, for that matter). With the release of debut My Mind Makes Noises, the band attempts to take their lofty ambitions and translate them into a full length album. Do they succeed?

Upon first glance, the band’s dark, goth aesthetic makes one expect a rock band that’s ready to break away from the status quo and rile up some much needed passion and energy in the mainstream. Don’t let this fool you, My Mind Makes Noises is a no-frills, bubblegum pop record doused in black eyeliner, bravado, and a painful lack of diversified songwriting ability.

The record begins with “Eighteen”, an atmospheric synthpop track filled with the usual clichés: a synthline intro, blatantly pitch-corrected vocals, the same lyrics about being young and in love, and an explosive chorus with a singsongy hook we’ve all heard before. This is followed by “There’s a Honey”, the lead single off the record. The track has a catchy synth hook with a jangly guitar lead that just gets stuck in your head upon first listen. The production is pristine, courtesy of labelmate Matty Healy of the 1975, which simply completes the full package.

The fun stops there. By the middle of the record, tracks like “Came in Close” and “Loveless” simply become stale and comical with their lack of variation and much needed change from the formula. Heather’s Dr. Seuss-esque lyricism starts to set the tone of the rest of the record, with lyrics like, “You always said I was so cold, but only with you” becoming the unfortunate focal point of the record. These lyrical themes become easy to mock, and deride the already lackluster songwriting of a major portion of the record. “She” is Pale Wave’s attempt at tugging at the heart, but lyrics like “Are you getting off with someone else? Don’t you lie, I can tell” and painfully off-key vocals redirect the track straight to the stomach, where it becomes hard to digest.

Tracks like “Television Romance” and “Black” hover on the brink of obvious emulation of their own singles, stretching the line between accidental reproduction and flagrant indolence. Closer “Karl” is an acoustic cut aiming to hit home, but corny vocals and awkward delivery make it fall flatter than Heather’s vocal chords.

If you’re looking for an album that will blow you away with revolutionary songwriting and thought-provoking lyrical content, My Mind Makes Noises doesn’t even scrape the surface. If your emotional depth peaked at junior year of high school and you just broke up with your significant other of two months, this might be the record of the year for you. On “One More Time”, Heather croons, “Can’t we just go back to when we were 17?” I sure do, because then maybe I would’ve found some semblance of emotional pleasure from this album.